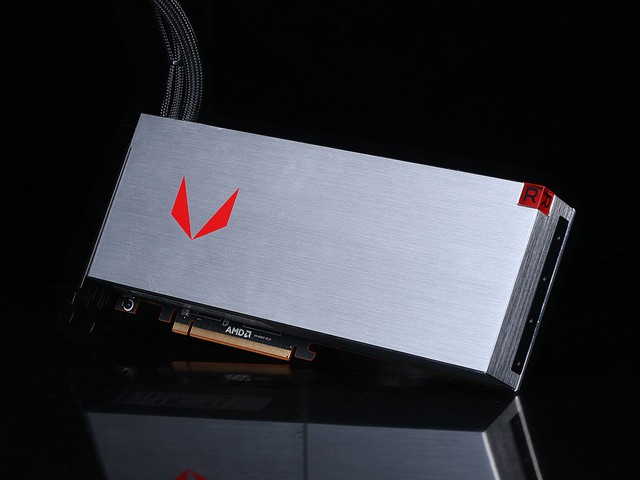 The VEGA 10 chip has the following features:

1. Based on the 14nm LPP FinFET process.

2. The 64 sets of NCU units are divided into 4 Compute Engines, and each Compute Engines contains 16 sets of NCUs. NCU is the largest underlying innovation since the introduction of the GCN architecture. It incorporates Rapid Packed Math (RPM) and can handle 512 8-bit, 256 16-bit or 128 32-bit operations per clock cycle. Especially a pair of FP16 floating point operations can be handled in a single FP32 ALU. If the two FP16 operations are compatible with each other, they can be packaged together for processing as FP32, thereby doubling the peak throughput. At the same time, the register can also split an FP32 into two FP16s for reverse operation. The NCU unit is optimized for high frequency and high IPC. It can perform calculation and graphics processing at the same time, and can change the width of SIMD unit according to different loads. Tasks that required multiple computing units to complete in the past, will be done with only one unit, without a waste of GPU performance.

3. Four sets of Geometry Engines corresponding to Compute Engines and four sets of DSBRs (drawing flow binners). DSBR can eliminate unnecessary processing and data transmission on the GPU, improve performance and reduce power consumption. AMD claims that DSBR can achieve 10% frame rate improvement in the game, while saving up to 33% of the memory bandwidth without increasing power consumption. . 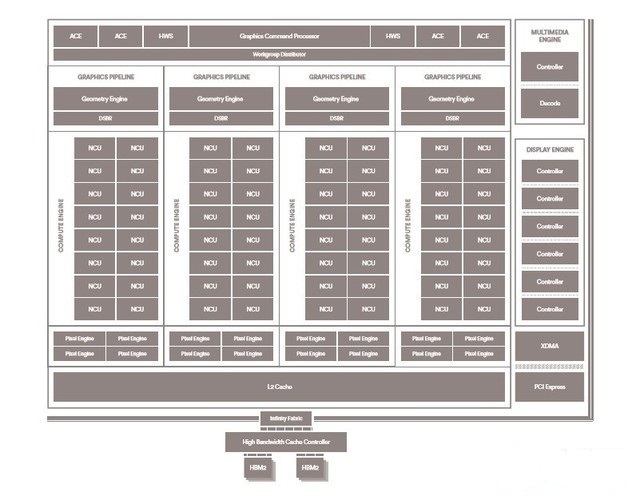 5. The secondary cache reaches 4MB, improving the power efficiency while reducing the memory bandwidth requirements, and saving energy in the memory operation.

6. Using the new generation HBM2 memory from Micron, the unit bandwidth is twice that of the first generation HBM, reaching 2Gbps/pin; the single Die capacity is up to 4 times that of a generation, and the occupied area is reduced by 50% compared with GDDR5 memory.

7. In order to better utilize the advantages of HBM2 memory, in VEGA, AMD has joined the High-Bandwidth Cache Controller (HBCC), which is used to manage HBM2, system memory, non-volatile memory and network storage. With a maximum virtual addressing space of up to 512TB, HBCC can accommodate and manage very large data sets and fine-tune the transfer of data. HBCC is regarded as the biggest innovation in the VEGA architecture. Simply put, the entire system memory can be used as video memory. It is equivalent to a graphics card that can have terabytes of high-speed memory. In other words, it implements a certain level of integrated memory pool. AMD calls this part "HBCC Memory Area" (HMS).

8．VEGA 10 is AMD's first GPU with "Infinity Fabric" technology, which connects the GPU with the main logic modules such as memory controller, PCI-E controller, display engine and video acceleration module. This modular design allows the GPU to be transformed according to the customer's different needs, and is also applied to the AMD "Zen" architecture CPU.
Supported Technologies
Radeon RX Vega 64,Radeon RX Vega 56,Radeon 550X Parameter comparison
Tips: The above parameters are for reference only, and certain parameter values may be in error with the official figures.
Radeon RX Vega 56 driver installation information
The following is driver installation information, which is very useful to help you find or install drivers for Radeon RX Vega 56.For example: Hardware ID information item, which contains the hardware manufacturer ID and hardware ID. These two ID values are unique and will not be duplicated with other hardware. According to these two ID values, the matching driver information can be accurately found. This method is more effective than any others, and 100% correct.There are many other information items that you can use to find the driver version information and the required driver files.