AMD released the world's first 7nm gaming graphics card, AMD Radeon VII, at the CES 2019 flagship. At the press conference, it mentions that the Radeon VII vs. RX Vega 64 has a 20-42% improvement in different games. 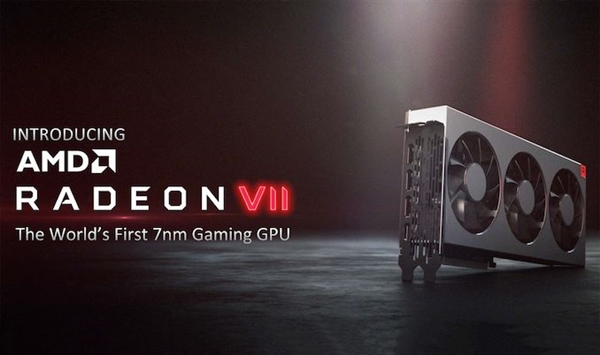 Referencing to AMD's published Radeon VII performance specifications, here is a summary of the specifications for RX Vega64/54, Instinct MI60/50, Radeon VII graphics cards, and you will find something interesting.

As the first 7nm process video card, it is actually "modified" based on the Instinct MI60 computing card. Both are second-generation Vega architectures, all built in 7nm process which makes 13.2 billion transistors compacted into 331mm, within 2 cores (the number of transistors is almost the same as that of RTX 2080 with RT Core, Tensor Core). And the first generation Vega has 12.5 billion transistors in 486mm2, with transistor density increased by as much as 36%. As transistor gap becomes smaller, resulting in heat accumulation, and the core temperature is necessarily higher, it is no wonder that Radeon VII uses three cooling fans, which is the results after measuring cooling performance and noise.

The size of the Radeon VII is also very interesting. The 60 NCUs are between the RX Vega 64 and the RX Vega 56. Compared with the 64 NCUs of the Instinct MI60 computing card, it is obviously incomplete. Why is this the result? The reason is that the 7nm process yield rate is limited in the early stage. While selling the Instinct MI60 computing card, AMD can pick out some cores that are less damaged and make the Radeon VII game card for sale to improve chip utilization.

The 7nm process makes AMD graphics cards no longer lagging behind. The Radeon VII is finally up to 1.8GHz, the same as the Instinct MI60/50. Although the RX Vega 64 can reach 1.68GHz with water cooling assistance, it is already limits of heating and power consumption. 7nm solves this problem perfectly.

The Radeon VII uses 16GB of HBM2 memory to boost memory bandwidth to the top 1TB/s with 2Gbps frequency and high memory bandwidth. Let's not say that whether 16GB of video memory is enough or not, just those who want to use Radeon VII graphics card for 3D rendering and animation are quite happy.

Radeon VII is equipped with dual 8Pin power supply, and the power consumption level is very high. To put it bluntly, Radeon VII is the Instinct MI60 "replacement" version, because the parameters are almost the same, and only that the PCI-e 4.0, Infinity Link support is removed, while AMD Radeon Software Adrenalin 2019 drive is used.
Supported Technologies
Radeon VII,Radeon RX Vega 64 Parameter comparison
Tips: The above parameters are for reference only, and certain parameter values may be in error with the official figures.
Radeon VII driver installation information
The following is driver installation information, which is very useful to help you find or install drivers for Radeon VII.For example: Hardware ID information item, which contains the hardware manufacturer ID and hardware ID. These two ID values are unique and will not be duplicated with other hardware. According to these two ID values, the matching driver information can be accurately found. This method is more effective than any others, and 100% correct.There are many other information items that you can use to find the driver version information and the required driver files.